Stone house in the village of Kalo Horio. 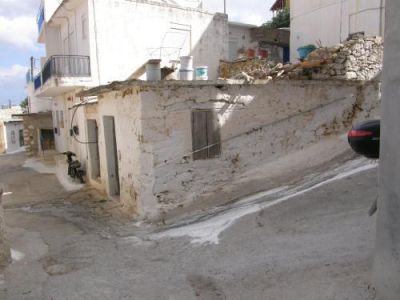 This sturdy stone house is a two-room structure of a total of 40m2.
However it is possible to turn this property in a lovely two floored, two bedroom home.
Another two floors could be built on top of the existing one, thus having a total of 80 m2 on two floors.
This is a corner property so it is able to have windows on three of its sides. (Something unusual for a village house)
There is easy access to this house and parking is nearby.
Located in a quiet area in the village of Kalo Horio.
Electricity, water and waste water pipes are connected to the house.
Beautiful sandy beaches are only 1km away and the capital of the area Aghios Nikolaos is a 12-minute drive away.
Kalo Horio offers many amenities and there is a strong local community plus a few foreign residents in the area. This allows the local shops a 12 month a year business rather than just summer season openings.
Thousands of visitors come to Kalo Horio to visit its three lovely beaches Aghios Panteleimon, Karavostasi and the golden beach of Voulisma.
There is a very good bus system connecting Kalo Horio to the rest of the island that operates on an hourly basis.
The international airport of Heraklion is about an hours drive from Pyrgos.